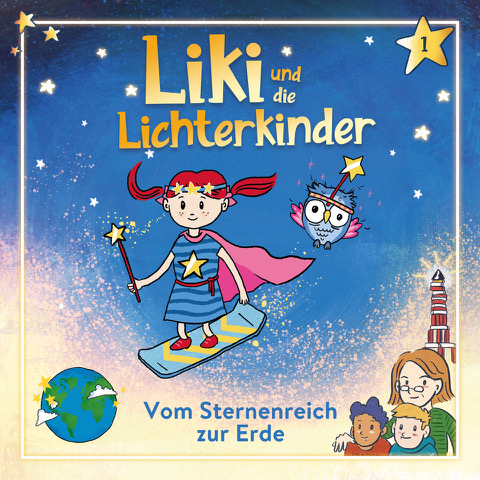 Description
Description
Close menu
Product Information Vom Sternenreich zur Erde
In the kingdom of stars in the sky, the stars can no longer shine as brightly as they did in previous centuries. They live and shine through the love of people for one another, which is becoming less and less on earth.
That is why the star king Henri sends the star girl LIKI and the omniscient owl LUMI into the world. They want to find children of light who show how one can be there for one another. Then the stars will regain their radiance.

LIKI and LUMI end up on earth in the musicians' villa of the Hannamann family and their five children. The family has disappeared, but left behind a box with many songs and sheet music.

The earth boy Ben takes LIKI to his kindergarten and becomes the first child of lights because he takes care of the refugee boy Bahir. Bahir also helps Ben and thus also becomes a child of lights.
The first star in the heavens then shines brightly and powerfully again.
This website uses cookies to enable the shopping cart functionality.